This is a slightly altered version of the page. All the search hits have been highlighted in yellow.

You can move between finds using the 'n'ext and 'p'revious keys (no CTRL). There should be a small counter top left showing your current position. These hotkeys work only if JavaScript is enabled.

This is unrelated to your browser's own "find" function -- you can use that at the same time. To use the real page instead click here.

Note that broad regexps (eg. "foo.*?bar") may not match as much here as they do in the "Search Results". The same is true for terms that include whitespace (you can prevent this by using a regular expression and \s+ instead of spaces).

Check out the daily Political Notes .

Here is a video Grav-Mass greeting . 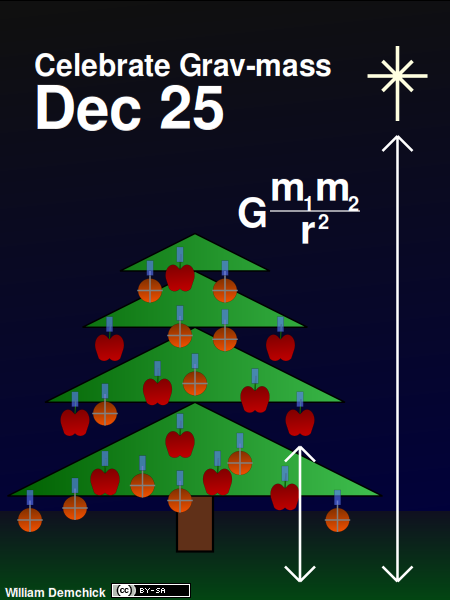 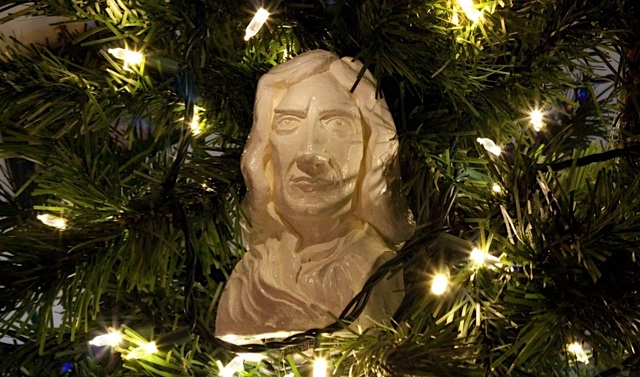 On December 25, Isaac Newton's birthday, we celebrate the existence of comprehensible physical laws. Remember, Gravitation is a well-established scientific theory, but Intelligent Falling is just religion pretending to be science.

Here's a gallery of Grav-Mass cards that you can contribute to.

One way to celebrate Grav-Mass is to decorate a tree with apples and other fruits. Glue them or attach them, but not too well! The idea is that occasionally a fruit should fall. Put them on the tree no more than 2 feet up, so that they won't get damaged or hurt anybody when they fall. Investigating and perfecting the methods for doing this is a great way expose a child to the process of scientifically studying the behavior of the physical world.

Another way to celebrate Grav-Mass is by throwing a ball or fruit back and forth.

Another way to celebrate Grav-Mass, in a group, is by telling each other about scientific knowledge and understanding, or discussing what kind of experiment could answer an unresolved question about the world.

There is a Grav-Mass discussion group . To participate you will need an account on a GNU Social server (you can find several options here ) although read only access does not require any account.

We have one Grav-Mass carol, We Three Laws . If you know of any others, please tell me about them: rms at gnu dot org. Other songs about science are also suitable to play or sing on Grav-Mass;

The Symphony of Science.

The Ten Days of Newton.

Also, The Galaxy Song by Monty Python. (And some commentaries on it .)

I think the idea of Grav-Mass was conceived by science fiction writer James Hogan.

On Dec 19, 2012, I opened an envelope and saw what I believe was the first Grav-Mass card ever made. It was made and sent to me by Simon and Jane Whiteley. Here are the images that appear in the card, in case you would like to make some. 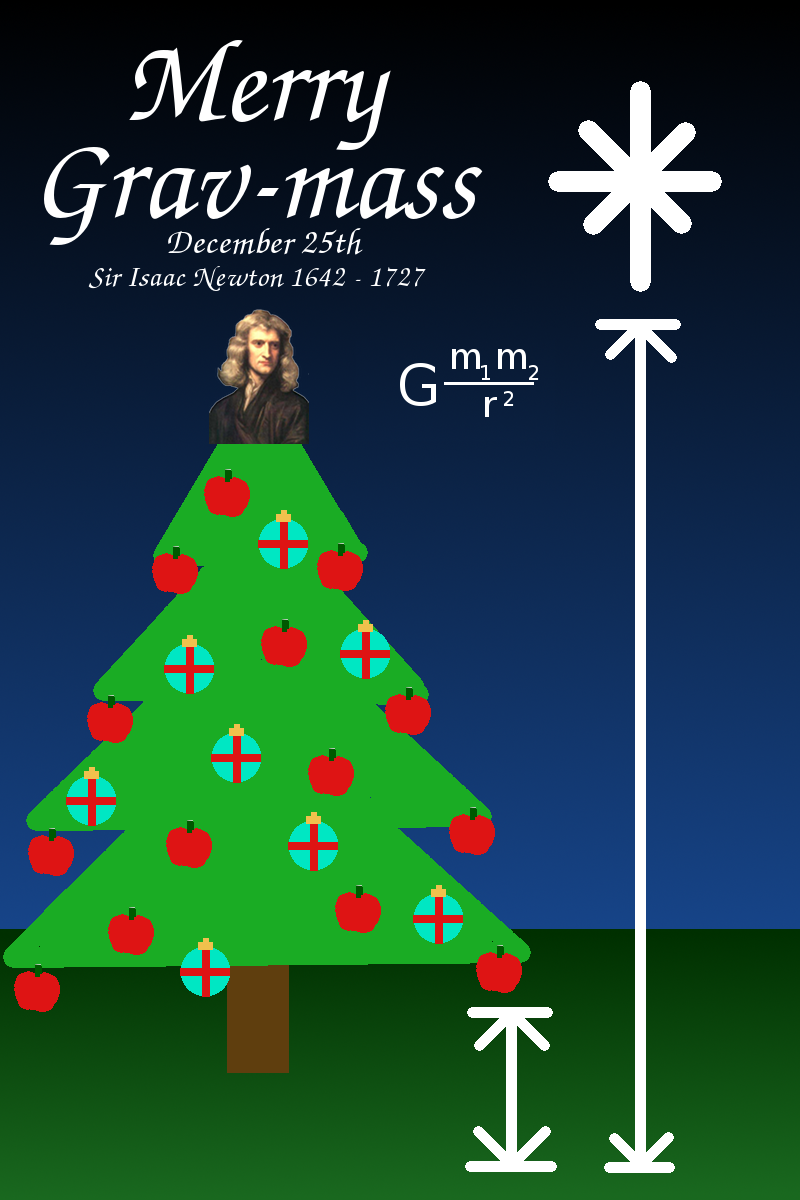 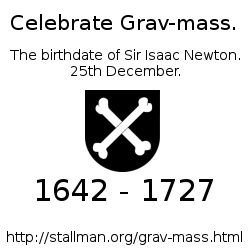 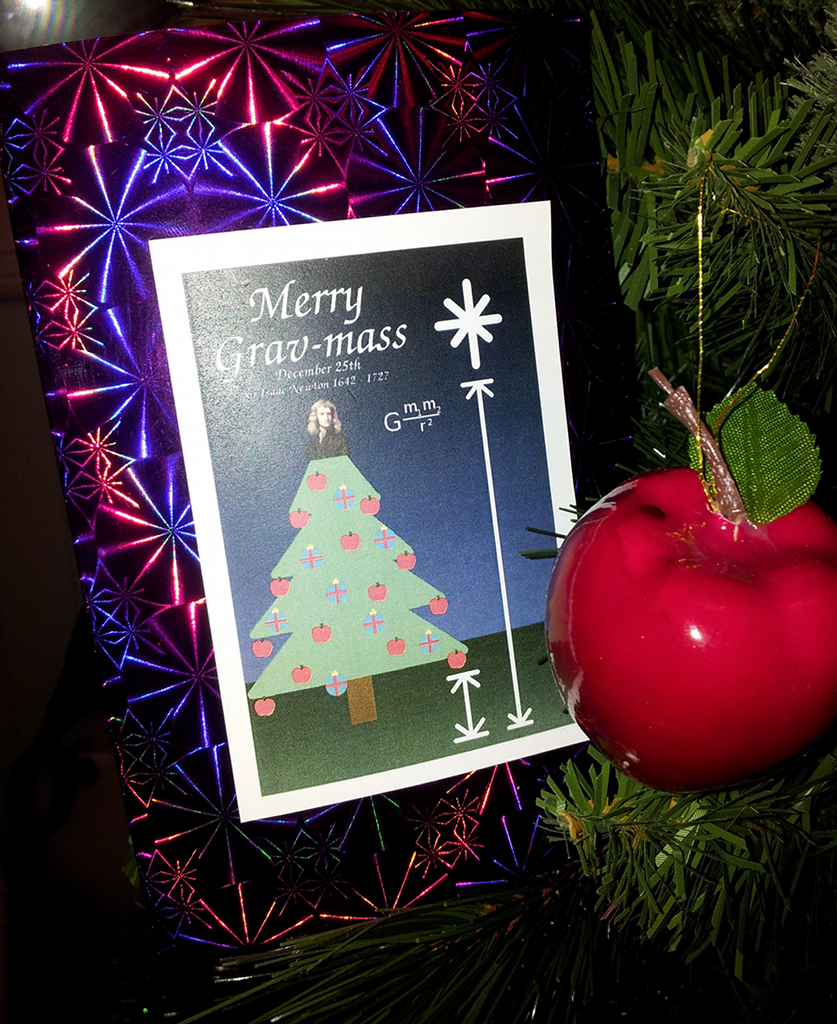 Here's info about their family Grav-Mass celebration in 2012 .

Here is another Grav-Mass card .

Here is an animation of the card .

Here are some photos of Nolene Ferrari Naidu's Grav-Mass tree .

Please send comments on these web pages to rms@gnu.org .

Verbatim copying and distribution of this entire article is permitted in any medium, provided this notice is preserved.