Business supremacy treaties are designed to undermine democracy. They transfer power from states (which can be more or less democratic) to businesses (which don't try or claim to represent the public).

The first method these treaties used was so-called "free trade": making it easy for businesses to move production from one country to another. This pressures countries to compete to offer businesses favorable conditions, such as low wages, poor benefits for workers, weak environmental protection, low taxes (meaning bad education, bad health care, crumbling and toxic infrastructure, and inadequate support for the young, old, disabled and unemployed), and the opportunity to ignore laws (lock fire escapes, steal workers' pay).

Since the 1990s, treaties have proceeded to direct attacks on democracy: authorizing other countries, or even foreign businesses, to sue a country in a special international court for failing to respect the supremacy of business. (When business are allowed to do this, it is called "ISDS", which informally stands for "I Sue Democratic States.") Under ISDS, if a country has a law to protect something important (such as the environment, endangered species, public health, workers' rights, or the general standard of living), the international court can label that a "barrier to trade" and impose fines. The country's "democratic" politicians will then almost certainly decide to eliminate that law. 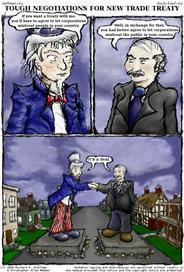 To recover democracy, we must abolish the business-supremacy treaties.

Big corporations are planning use ISDS clauses to sue many countries for taking Covid-19 emergency measures that cut into their profits.

Governments may be able to argue that the losses were due to Covid-19 and its consequences, rather than to the government actions themselves. But that is not reliable.

This page contains a list of ways business-supremacy treaties have done harm. Most of the items describe specific changes in laws or policies that were imposed through these treaties.

Please email me at rms at gnu dot org if you know of other specific laws in any country, that tried to protect something more important than business profits, that were attacked using a business-supremacy treaty, or that were voted down on the grounds they would conflict with such a treaty.

US proponents of these treaties claim their advantage is to boost exports. If they did that, that would not justify the harm they do to democracy. But they don't really boost exports anyway, not for the US. Even in the narrow terms of trade and "national interest", they are a bad deal.

In general, US export growth has been low wherever the US has a "free trade treaty".

Even when these treaties lead to economic growth, they assure the benefit will go to the rich; working people may become poorer all the while, as wealth and income become more concentrated.

No wonder the think tanks that support the TTIP are funded by plutocrats as a form of "policy laundering".